Difference between LSAW steel pipe and SSAW Pipe Pile are followings below:

The welding process is concerned: a consistent spiral welded pipe and Longitudinal welding, straight seam SSAW Pipe Pile will inevitably have a lot of T-weld, and therefore the probability of the existence of welding defects has greatly improved, and welding residual T welds stress is large, the weld metal are often in three-dimensional stress state, increases the likelihood of cracks. Furthermore, according to the provisions of submerged arc process, each weld shall have the arc at the place and extinction, but in each Longitudinal seam welding ring, unable to meet the conditions, which may have a place in the extinction more weld defects. 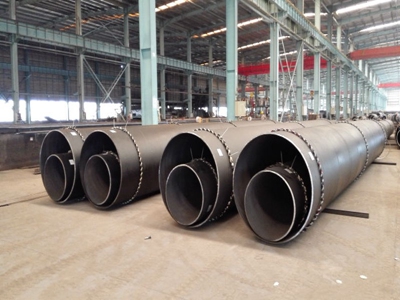 When the pressure in the SSAW Pipe Pile to withstand, typically produces two main stress on the wall, that the radial and axial stress δ . Weld resultant stress δ, wherein the helix angle of the weld. Spiral Weld Pipe degree helix angle is generally, therefore synthetic spiral weld stresses are the principal stresses. Under the same operating pressure, SSAW Pipe Pile of the same diameter than the Longitudinal wall thickness can be reduced.

The hydrostatic burst strength: by the relevant comparison test, to verify the yield pressure and burst pressure measured and theoretical values spiral pipe and Longitudinal basic agreement, deviation close. But neither the yield stress or burst pressure, SSAW Pipe Pile were lower than Longitudinal. Blasting test also shows spiral steel hoop blasting mouth deformation rate significantly greater than the Longitudinal. It was thus confirmed, spiral pipe plastic deformation than Longitudinal, blasting the mouth is generally confined to within a pitch, which is spiral weld for expansion gap played a powerful role in binding due.

Toughness and fatigue strength: pipeline development trend of large diameter, high strength. With the increase of the diameter of the SSAW Pipe Pile, the steel grade increase, resulting in greater the ductile fracture tip steady expansion trend. Spiral pipe and Longitudinal although the same as a level, but the spiral steel pipe has a high impact toughness.Because of the transfer line output volume changes: in actual operation, the pipe is subjected to random alternating loads of action.Learn low cycle fatigue strength of steel, judging life of the pipeline is of great significance.Press the measuring result: fatigue strength spiral steel seamless and SSAW Pipe Pile with the same test data and seamless pipe distribution and resistance in the same area, while Longitudinal submerged arc than the average higher.

Shunli Steel Group offers worldwide customers with one-stop services from pile design and selection, manufacturing, door-to-door transportation to guidance service forinstallation. Shunli has many different kinds of products, including U and Z sheet piles, omega sheet piles, pipe piles, tubular pipe piles, Combi walls, etc.No matter you are at the Palermo Port in Italy, Montoir Port in France, Baltimore in America, Gladstone in Australia or eventually various highways, railways, ports and canals inChina, it is easy to find the usage of Shunli Sheet Piles everywhere. The products have been used in over 60 countries and regions, and it has been a common view that if you need sheet piles, comes to Shunli to find it.