Home » News » Industry knowledge » How to identify the quality of SSAW steel pipe?

How to identify the quality of SSAW steel pipe?

In the production process of SSAW steel pipe, a series of matters need to be paid attention to. In addition to the following test items, in accordance with API standards and other relevant standards and special requirements of some users, destructive tests on steel, steel pipes, etc. are required, including factory sampling of the physical and chemical properties of raw materials, and visual inspection of 100% steel. 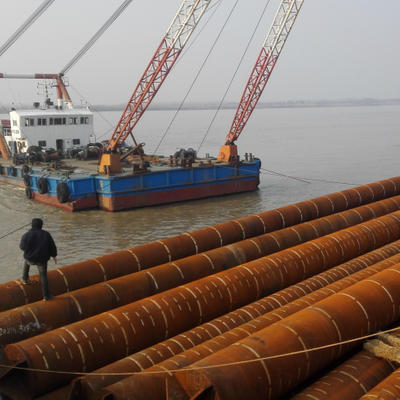 Because some inferior manufacturers have tin can equipment. Prime Steel Pipe is positioned as an excellent steel pipe manufacturer and carbon steel pipe exporter. We have more than 20 years of SSAW steel pipe manufacturing experience. Therefore, the quality of SSAW steel pipe produced by Prime Steel Pipe is the best, you can rest assured to choose our spiral welded pipe. Generally, burrs will scratch the appearance of SSAW steel pipes, which are easy to fold and have thin and low ribs. And there is often dissatisfaction. The reason is that the manufacturer has realized a large negative tolerance, a large reduction in the first few passes, a small iron type, and a dissatisfaction. Easy to crack. The reason is that the blank is adobe, and the adobe has many pores.

SSAW steel pipes often have quality problems in production and use.

Therefore, we need to identify the quality of SSAW steel pipe, and whether it can play an important role in actual use according to certain methods and performance testing. So how to identify counterfeit spiral steel pipe method: there are often lumps in appearance. Generally speaking, the overall effect of weighing will be better, mainly considering the cumulative error and probability theory of this problem. The pitting surface is caused by serious abrasion caused by irregular and irregular appearance of the spiral steel pipe. As a manufacturer of shoddy SSAW steel pipes, in order to pursue profit, it is often the rolling standard with the most rolling. The appearance is prone to scars.

The end of the top crop is smooth and neat, and the composition of high-quality SSAW steel pipe is uniform.

Due to the poor quality of the fake and inferior materials, the end of the cut surface often has meaty phenomenon, that is, unevenness and no metallic luster. And because the fake manufacturer cut off the small head, big ears will appear on the head and tail. The size of the inner diameter fluctuates greatly. The reason is that the temperature of steel is unstable on the yin and yang sides. The composition of steel is not uniform. Folding is the appearance of spiral steel pipes forming multiple fold lines, and this defect often runs through the longitudinal direction of the entire product. The reason for the folding is that the manufacturer pursues high efficiency, the amount of sag is too large, the ears appear, and the next roll when folding,

Fake material has irregular rolling temperature and no metallic luster.

Pale red or similar pig iron color. The cross section is oval. The reason is that in order to save data, the manufacturer had too much pressure on the two rolls before scrapping. The strength of this steel bar was greatly reduced, and the steel bar size did not meet the specifications. There are two reasons:. The material of the false spiral steel pipe is uneven and there are many impurities. Fake and inferior material manufacturers have simple guide equipment and are easy to stick to steel. These impurities will easily cause scars after biting into the roll.

Shunli Steel Group offers worldwide customers with one-stop services from pile design and selection, manufacturing, door-to-door transportation to guidance service forinstallation. Shunli has many different kinds of products, including U and Z sheet piles, omega sheet piles, pipe piles, tubular pipe piles, Combi walls, etc.No matter you are at the Palermo Port in Italy, Montoir Port in France, Baltimore in America, Gladstone in Australia or eventually various highways, railways, ports and canals inChina, it is easy to find the usage of Shunli Sheet Piles everywhere. The products have been used in over 60 countries and regions, and it has been a common view that if you need sheet piles, comes to Shunli to find it.